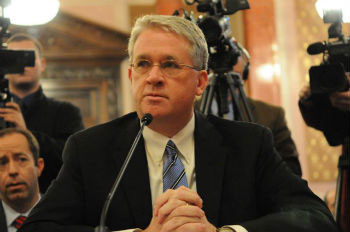 In August of 2013, Jim was unanimously selected by his Republican colleagues to fill the vacancy of House Republican Leader and was officially inaugurated by the full House of Representatives on October 22, 2013.

During the 100th General Assembly, Jim worked tirelessly with members on both sides of the aisle to successfully negotiate a new education funding formula for our state. Now the law of the land, Senate Bill 1947 ensures that all students across Illinois receive adequate and equitable school funding regardless of where they live or income status. Jim was also the chief sponsor of Senate Bill 1722 which now gives judges the ability to crack down on repeat gun offenders by giving harsher penalties. This measure will reduce gun violence plaguing communities across our state. Read more about Leader Jim Durkin.